July 21, 2019
So four years ago in late June was the first time I was introduced to the TV show American Ninja Warrior. My cousin Ryan showed me a video of Kacy Catanzaro who was the first woman to complete a city finals course at the Dallas City Finals in 2014. He said a new ninja gym just recently opened up where he was in Philadelphia. A few months later I found out one did exist in Miami, and I started training for 30 days for a friend's birthday party before we tried out the course there.

Over these 4 years I've had a lot of great experiences. I was able to pass many of the obstacles the same day I tried them out, so in 2016 I submitted my first video. Later that year I competed in my first local competition and did well on the first stage, but fell early during the second stage.

In 2017 I received a call from casting after I highlighted ninja training had helped me overcome health problems like a collapsed lung in my video, but I didn't get THE call. I was still able become more involved in the community by training with other local ninjas, attending the Daytona Beach testing and taping, and joining in on other events like obstacle races.

In 2018 we saw the show come to my hometown of Miami, which also happened to be the same weekend as the South Beach Triathlon that I completed with my cousin. At a local competition I broke the wingnut obstacle by pulling it right off of its base, which gave me a head ninja injury (ninjury) with 6 stitches and a staple in the head.  I decided to take a break on training for a bit.

This year I missed the taping of the show in the Southeast region, but I'm looking forward to a new gym near me and I even put up a few obstacles in my back yard to have my daughters start their own training.

So even though December 5th may be the official International Ninja Day, I'm still celebrating my 4 year anniversary since discovering Ninja Warrior (Ninjaversary) with pride, and honor all my fellow ninjas with a proper warrior bow. I'm looking forward to hearing from other fellow ninjas and their stories on our Facebook group.

Popular posts from this blog 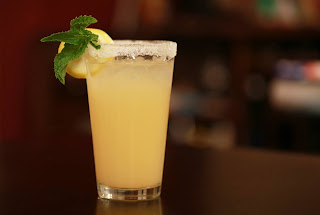 Years ago I was clueless when it came to staying in shape. Luckily I've had time to learn a lot over the years with some motivation & knowledge from books like: Bigger Leaner Stronger for men (Thinner Leaner Stronger for women) by Mike Matthews . You can listen on Audible , and the eBook or physical book helps to visualize the movements. So when COVID-19 happened I was prepared to stay healthy through the year. In February I had just finished my fastest 5K race ever, & also had trained myself to complete the Murph Challenge on Veteran's Day. Staying at home meant more time to experiment, even with drinks such as a Mixology class that I took. I try to simplify my household & use what I already have. My superpower is using it up before expiration at all costs. We had a Ninja blender that was gifted a while back, & I knew we had to try it out. I've always had a sweet tooth, & I always pictured myself starting a lemonade stand business at a kid. I got to ex
Read more

September 15, 2019
So if you haven't been caught up with American Ninja Warrior this season, we saw a record number of 18 ninjas finish stage 2 in the national finals. With those numbers we can confirm we will crown a winner in the first time in four years .   You can watch it Monday night on NBC live on TV or through their website by signing in with your provider. So how do you follow what your favorite ninjas are up to? Well you may have seen many of them show up with their Instagram social media account during their run, and many also have their own YouTube channels as well. The show does mention American Ninja Warrior Nation at SB Nation as the official source of ninja news, but you can also find them on other social media like YouTube and Twitter.   There is also a ninja warrior podcast that goes over stories of the ninjas, and it is great to get inside the minds of these great athletes. The first podcast is a fascinating interview with Nicholas Coolridge . A recent
Read more

March 17, 2020
My Doctor wife has been handling the influx of telemedicine patients today with Coronavirus symptoms & basically urging most of them to  http://staythefuckhome.com  (see my earlier post for more on that).   The health care system in our area is currently offering free virtual visits at https://go.baptisthealthcareondemand.net/care19/. There are also many other resources being shared within the community while we fight through this.   Quarantine won't stop me running & exercise from home though, so our greatness never stops 🙂
Read more